A comprehensive guide to Number Formats in Excel

Number formatting in Excel is used to change the way a value appears in a cell or range of cells. Generally speaking number formatting does not actually alter the value, it only changes the way the we see the it.

This isn’t true in all cases, numbers formatted as text are no longer considered as number types and thus it can be suggested that number formatting can change the value of the cell.

A more accurate method of determining a cells true value is to focus on the value as it appears in the formula bar.

When one formats a cell one typically uses the Format Cells dialog (Control+1). 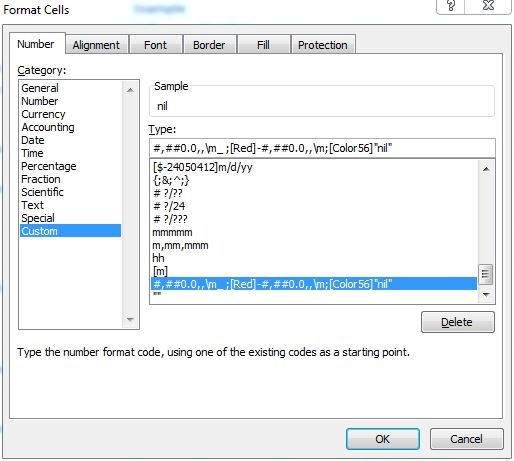 There are a variety of predefined formats to choose from in the Category list. The underlying code to any one of these formats can be seen by selecting the format from the list and then by immediately proceeding to Custom format. One can define and alter number formats using the Custom category.

Number formatting can be used in some very creative ways. There are many occasions where the unaware user constructs complex formulae to display results, or uses conditional formatting, where an otherwise relatively short number format code would do the same.

One needn’t complete each component of a number format. Where one or more of these components are omitted, Excel will make the following assumptions:

Thus, any cell formatted with the following code;

will appear blank regardless of whether or not the cell contains a number (+ve, -ve or 0) or text. Every number format component is complete in this code, yet blank, and hence so shall the appearance of the cell be.

This section describes what the various characters in a number format code means* These characters can be categorised as Text, Number, Date and Time.

Literal Characters; i.e. these characters will appear in the cell according to where in the number format code they are entered.

Note: The decimal and thousand separator character is determined either by the regional settings, or the chosen characters defined in Excel’s advanced options if one chooses to override the default separators. Be aware therefore that these separators may in fact not be the same as described in this article.

However, one can create even more format conditions. Excel provides an ability to format a number according to its’ value.

One does not have to stipulate the exact value for a format; rather one can choose from a whole range of comparison operators.

Conditions must be enclosed in square brackets, e.g:

A typical usage is to format -ve figures in red font. For example:

which is the same as:

Scale a number by a factor of 10

The following table demonstrates the format method for scaling by a factor of ten. The number of decimal places and such is entirely up to you. I have used 12 decimal places for all numbers only for display purposes. The actual scale display is achieved using the component referred to as the “modifier”.

There’s a little quirk one should be aware of, so as to not assume that there is something wrong. It seems that after applying some of these formats, when one returns to the format dialog the format code appears different (wrong even). Don’t worry, the format appearance is correct! It appears Excel is confused!

A quick guide to fractions

Format of a fraction: # N/D

Proper Fractions: When the numerator is less than the denominator. E.g.: 3/4

Improper Fractions: When the numerator is greater than the denominator. E.g.: 4/3

Mixed Fractions: When what would otherwise be an improper fraction is represented as the whole part and the remainder expressed as a proper fraction.

Examples representing 2.235 as a fraction:

The precision displayed is dependent on the number of denominator digits. Looking at the exhibit above, 2.235 is displayed as 2 1/4 if formatted as single-digit fraction. This equates to 2.25, an imprecision if 0.015. This fraction requires triple-digit format to display full precision.

Fixing the significance of the denominator also affects the precision. The factor is of your own choosing, note however in the exhibit how neither halves, thirds, quarters, eighths or tenths can accurately display 2.235 as a fraction.

Colour coding cells according to value

> All values greater than or equal to 50,000 must appear AMBER

> All other values must appear RED

The order of the conditions in this format is of the utmost importance. Because Excel is configured to be efficient, as soon as any condition is met Excel will no longer evaluate the rest of the format.

Colours applied in number format overrule any font colour applied. Thus, should the cell be formatted as red and none or the conditions met, the font will remain red. As soon as a condition is met however the cell font colour will be inherited from the number format.

Use symbols within number formats

There are two ways of including symbols in your number formats.

The chevron character can be typed into a format by holding ALT and typing 0171 on the numpad.

This format requires that the cell be formatted with Webdings font.

Prefix text with a bullet point to create a bullet list: • @

The bullet character can be typed into a format by holding ALT and typing 0149 on the numpad.

Use the degree symbol to display temperature: # °C

The bullet character can be typed into a format by holding ALT and typing 0176 on the numpad.